Happy spring! I have to say, the sunshine this week has been such a welcome relief from the gray clouds, rain, and cold weather. Even with the crazy wind we’ve been having, just having the sunshine out has made me feel like spring is really here!

We spent three weeks in Florida this past month and it was a much needed vacation. I’ve been trying to get back in the swing of things since we returned home which isn’t the easiest thing to do for some reason.

While we were gone, our contractors ripped out our master bathroom and began working on our bedroom too. In theory they were going to try to be finished or close to being finished by the time we returned home.

Our house is officially completely under construction. Every single room is torn up except for the main part of the kitchen. I’m living upstairs in my older girls bedroom in a corner of the room {the bed} because the rest of the room is piled high with furniture and stuff from the attic as they are rewiring the whole house and part of that rewiring has been in the attic.

The girls and I finally drug the sofa back in front of the fire place so we can sit in there, but the room is only partially complete.

I’ll be so glad when this renovation is done. I’m sure it will be worth it, but we’re ten months into this renovation and we’ve had our workers here every single day all day long for the the entire ten months. No privacy. The other day, Laura says, “Jay and John are like family now. They’re in our house more than we are.”

So, the last couple weeks have been the usual crazy. So many good things have happened. First, Laura was given the clear to ride her horse again. You may remember that back in November she fell off a horse we were trying out to buy and broke her arm really bad.

In January we purchased that same horse after she came to me and said, “Mom, I’ve been praying and praying about it and I just keep coming back to Theo.”

How could I argue with that?

So despite the fact that she fell off of him on her first ride and broke her arm right below the shoulder, we drove back to Blacksburg, Virginia and purchased Theo.

Theo is an off track Thoroughbred {OTTB}, meaning he is an ex-race horse. He’s 11 years old and 16.2 hands tall. He raced for five years and his registered race name is “Who’s There.”

She had definitely lost some of her confidence – understandable considering everything she’d been through for sure! But she was {and is} determined to work with Theo and to feel confident. So over the last three weeks she’s been working on teaching him to respect her. Every day we went to the barn I could see a little more confidence in her stature.

First, she taught him to stand still since he had a bad habit of moving around when tied, grooming, or tacking up. Now he stands perfectly still whether she drops his lead and walks away or if she’s grooming him.

Third, she had to face her fears of picking up his feet and cleaning out his hooves. I don’t want to say she was really afraid, but in the first couple week of owning him, he seemed so big and since her confidence was down, she never even tried to pick up his feet.

I finally told her, “Laura, you’re going to have to clean out his feet.”

And I saw her nod her head, take a deep breath, and walk up next to him and reach for his leg. The first time he stomped his foot back down and she asked him to pick it back up. She grabbed his leg and he let her pick it up. She cleaned out his front hooves and then went to his back feet.

When she reached for his foot and picked it up, he kind of kicked out a little and she dropped his foot. And to be clear, I don’t believe he was trying to kick her. It wasn’t that kind of kick. More like he wanted her to drop his foot. She smacked his rump hard and asked for his foot again. Same thing. She hit him even harder. Same thing. He kicked out and stomped his foot back down.

She grabbed the lead rope from me, pushed her shoulders back, swung around and whipped him with the lead rope on his rump. He jerked his head up high, shocked, and she stared him down until he relaxed. Then, she went to pick up his foot and this time he listened and was perfect.

Every time since then, she doesn’t have to correct him. He’s learned to respect her and he listens so well now. Of course, respect is something she will always have to work on. Horses will test your resolve from time to time! Kind of like kids!!

Knowing that her last ride on Theo ended badly, we all knew she needed to have a good experience getting back in the saddle so on Thursday last week I drove her down to Chattanooga to ride her sister’s horse, Dreamer. It’s easy to have a mental block or feel afraid when you get back on a horse for the first time after an accident.

We wanted her to be able to ride a horse she was used to riding and you’d never know she’d been out of the saddle for four months.

She rode Dreamer and even jumped her a few times! I was so proud. She said it was terrifying to jump at first but then it was okay. And she faced those fears head on.

We have a lot of conversations about how it only takes a second of courage. One second to make that decision and go for it. It is my desire that my girls not live in fear but instead follow their dreams and live boldly.

Sarah hasn’t ridden Dreamer in a saddle in quite a while so she enjoyed riding for a while too. It was just a great afternoon.

Thursday night we attended my daughter, Emily’s classical guitar recital at her university. She did such a beautiful job! We spent the night at Sarah’s house and enjoyed supper and a movie before crawling into bed.

It was so great to be there with my older girls. I don’t get to see them enough these days! Here’s a photo of Emily and her boyfriend, Nacor after the recital:

On Friday we came home and went to see Theo. She wasn’t sure she wanted to ride and seemed a little nervous despite the good day she had on Thursday. But I told her, “Laura, it’s not going to be less scary next week. Let’s saddle him up.”

After grooming him and cleaning his feet, Laura saddled Theo up and he stood perfectly still. She went to put a bridle on him for the first time and we were all surprised when he easily took the bit, no problem! Unfortunately the bridle we had was just a tad bit small and didn’t fit.

So, we decided she would do a pony ride with Hannah leading. I was videoing, so Hannah led him over to the mounting block. Laura put her foot in the stir up and swung her leg over his back. He didn’t move. He stood perfectly still. He was such a good boy!

Hannah led them around the arena for a few minutes and then they traded and Hannah got on his back. A little while later they decided to ride him without the bridle, but using the halter and lead rope like a bitless bridle.

And you know what? He was so responsive. He listened so well. Laura was able to ride him without the bridle – and then without Hannah leading and you’d think he had a bit in his mouth he did so well.

He’s going to be such a great horse for Laura. It’s definitely an answer to prayer. She’s so excited to train with him and work towards competing in a few months.

So I guess that’s all I’ll share for now. Have a great day!

This post may contain affiliate links. You can read my disclosure policy here.… your horses have icicles hanging off their fur. That was the sight that greeted us today when we went up to take care of our horses. Yeah. It was that cold. 9 degrees to be exact when we were up there. We…

This post may contain affiliate links. You can read my disclosure policy here. Look at the variation in color! They are sooo pretty. We are getting over 120 eggs a month now from the hens I own. Not all of them are laying yet. I am still waiting to get those beautiful pink and green…

This post may contain affiliate links. You can read my disclosure policy here.Like I said, the temperature on Friday night dropped to around 32 degrees. It was really cold and all night long I kept thinking, if only my feet would warm up! Silly me, didn’t want to crawl out of my “semi-warm” sleeping bag… 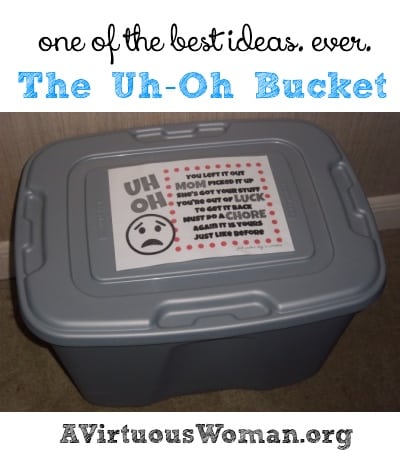 This post may contain affiliate links. You can read my disclosure policy here.This is one of the best ideas. EVER. I found this idea, again, on Pintrest! I loved the idea so much that I implemented it into my home within 24 hours. The kids were okay with it, if not thrilled. This is my…

This post may contain affiliate links. You can read my disclosure policy here.My daughter, Laura – age 8, surprised me by planting her own garden and working the soil, right in the middle of our front yard in an old stump we had been filling in with dirt. I didn’t even know she had planted… 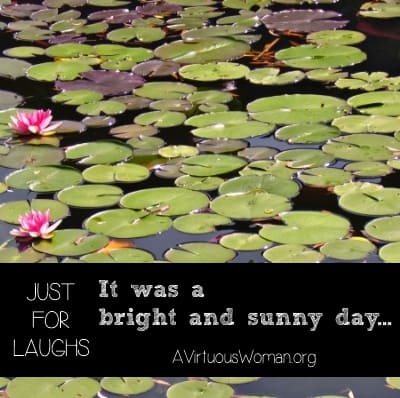 This post may contain affiliate links. You can read my disclosure policy here.(This post is from August of 2010… but when I came across it today, I couldn’t help but share it with you again.) We had a very nice church service with a baby dedication and wonderful fellowship. The weather was perfect. Not too…